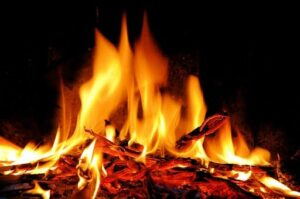 A nice distinction between Bushcraft and Survival is always that at Survival you stay alive or try to stay alive until you are rescued. With the knowledge Bushcraft, you make sure you don’t have to be rescued. Fire is an important part of that.

Bushcraft and fire are two things that seem to be inextricably linked. Fire is also one of the most important elements we use when we live outside. Fire provides heat, but also safety. It allows us to boil water so that it becomes drinkable. Fire also ensures that we can prepare our food. But fire can also keep us from becoming food.

Fire is what we see and feel when a combustible substance undergoes an oxidation reaction at high temperature.

Solids can’t burn, liquids can’t either. All that burns is gas.
That may sound strange, because wood is not gas, after all, and neither is gasoline. Only the vapor that is released from the wood released, from gasoline only the evaporated gasoline burns.

An combustion is the binding of oxygen to the fuel (oxidation). This connection releases energy. Because the air with the oxygen in it easily mixes with the fuel, the combustion continues quickly. The heat released is used to vaporize or gas the fuel’s follow-up, and to start the reaction between oxygen and fuel. Warming and decomposition of neighbouring matter release combustible gases. These gases also oxidize again and generate heat, which allows the process to sustain itself.

The fuel often consists of a hydrocarbon, the carbon of which burns to carbon monoxide and carbon dioxide, and the hydrogen burns into water. The other elements that are in the fuel can sometimes and sometimes cannot burn. If these can’t burn, they’ll be left behind as ashes.

The light of the fire is generally caused by very hot glowing soot particles and gives a characteristic flame spectrum. The brown parts of the fire are caused by no more glowing soot that absorbs part of the light from the flame behind it. When the fire is out of control, you speak of a wildfire. The smallest part of a fire you call a flame. There may also be a direct oxidation of a fixed surface, called smoldering. In the case of porous materials such as charcoal, the oxidation reaction can also occur in the material.

When making your first campfire, think about the next campfire you will make.
Is it useful to make charred cotton or keep charcoal for this? This takes the smallest spark and so you can save material again. Or find some tinder etc for the next campfire and start drying it by the fire already.

If it takes more than 5 seconds to light the fire with a lighter, there is something wrong with the build-up.
The same goes for the ferrorod, scraping sparks more than 3 times is a reason to think about everything again.
Too thick material, not (flammable enough, damp material, …
Just by throwing a lot of wood on a pile and try to light it up
only works in the movies, not in real life..

Fire consists of three 3 elements that must always be present to get a good burning campfire.
Take away one of these three things and the fire goes out! 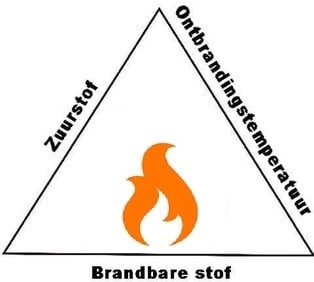 Too little oxygen and a bad burn follows which in turn gives a strong smoke development and a great chance of extinction of the campfire. A lot of oxygen and a quick combustion follows so that the fire may become too hot and consume (too) much fuel.
By controlling the oxygen supply, you can vary in a slow or fast/hotter combustion

When igniting, it is necessary to get enough heat as quickly as possible so that the campfire will burn small to larger material. Oxygen is very important in this area so (careful) blowing or retoking may be necessary to feed extra oxygen and thereby increase heat.

Small, fine material burns faster than large, thick material; the same money for dry material versus damp material. Wet material only burns if there is already a fierce fire and must be dosed even then. Allow it to dry near the existing fire first. Once the burning of the material starts, the fire will gas the surrounding material. This gasification keeps the fire burning.

There are several tools you can buy and/or create to start a fire. But that’s just the beginning. There’s so much more to it. Think of the woods and their energetic value. But also to ways to build it, the shapes and benefits of different fires. Is it desirable that the fire is seen or not? But also the circumstances under which you make fire. Is the environment very wet or very dry?

Besides water, I think the (camp) fire is the most important part.
However, you impose quite a few restrictions if you rely only on a lighter, matches or even on a ferrorod/firesteel.
Don’t get me wrong, ferrorods like the one seen next door that’s made and sold by Bison Bushcraft– are great. I use them myself a lot. But these also run out or lose.

In the underlying pages everything that creates a fire, remains fires and/or can be transported.

You will notice that everything comes up for preparation, perseverance but above all knowledge. It’s nice to have a spark, coal etc. But then….