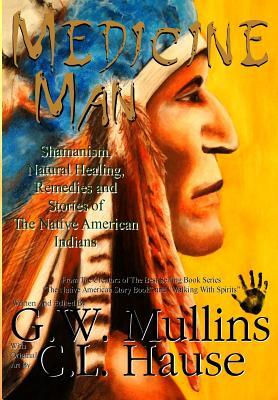 Author: G.W. Mullins
Genres: Natural Healing, Shamanism, Spirituality
Publisher: Light of the Moon
The legend of the Native American Medicine Man goes back for thousands of years. Many of the Native Americans turned to the Medicine Man for the knowledge of mixing herbs, roots and other natural plants that helped to heal various medical conditions. But remedies were not the only part of the healing process. Healing practices varied from tribe to tribe. Many involved ceremonies, and rituals that healed the spirit and mind as well as the…

Healing practices varied from tribe to tribe. Many involved ceremonies, and rituals that healed the spirit and mind as well as the body. The end goals was to find a complete harmony within themselves, their creator, the environment and the people around them. Only when harmony was in place, could good health resume.

Herbs played a large process in the healing process. The remedies made from natural herbs and plants gathered from the local environment resulted in a variety of cures. These herbs and plants were considered sacred.

As was the way of the Native American Indians, these practices were handed down from generation to generation by word of mouth. They were never documented in writing. Many tribes had no written language, except for the Cherokee. They in later years documented some of their practices for their preservation and history. Sadly the knowledge of some of those tribes who had no written language has been lost over the years. When no one was left to pass down their customs, the heritage of those tribes disappeared.

When the early Europeans arrived in North America, they were surprised to see that the Indians used herbs to heal medical situations that in some cases they had thought to be terminal. Sadly for the Indians, they had no cures for the diseases that the Europeans brought with them. White man’s diseases, such as measles and small pox, wiped out thousands of the natives over the next few centuries. Not only were these Native Americans lost, but in many cases the knowledge of history and medicine went with them.

Today many modern medicines are based on plants and herbs that were used by the Indians. Many of the remaining tribes continue to guard the knowledge of their medicine people and the subject will not be discussed with non-Native Americans. Many believe that sharing of the healing knowledge will weaken the spiritual power of the medicine.

About the Author: Marco