Working and using map and compass is one of my favorite ways of navigating. When it’s dark, the stars can be a tool. For convenience, and certainly all technical possibilities in terms of avoiding traffic jams and road breaks, I have a GPS in the car. Outside, I actually trust most of the time on my map and compass. Later I will explain to you why say most of the time, fog or snow are such a moment. The compass and its operation is still a kind of magic for some people. The fact that the little needle always manages to find the magnetic north flawlessly is for many people a kind of magical power.

However, if you work a lot with a compass, you will soon find out that not only the needle pointing north is important. After all, concepts such as cross-polling, triangulation, declination and inclination zones will be around the corner as soon as you really want to make serious use of all the possibilities that a compass can offer you. In addition, each manufacturer applies all kinds of handy or less convenient gimmicks to the compass. In the example below and during most of the info on this website we assume a plate compass. With the drawing and description below I will try to name parts of this plate compass. Please note, as mentioned before, each manufacturer builds this plate in its own way. However, with this description you will be able to quickly and easily find what you are looking at and what it does. 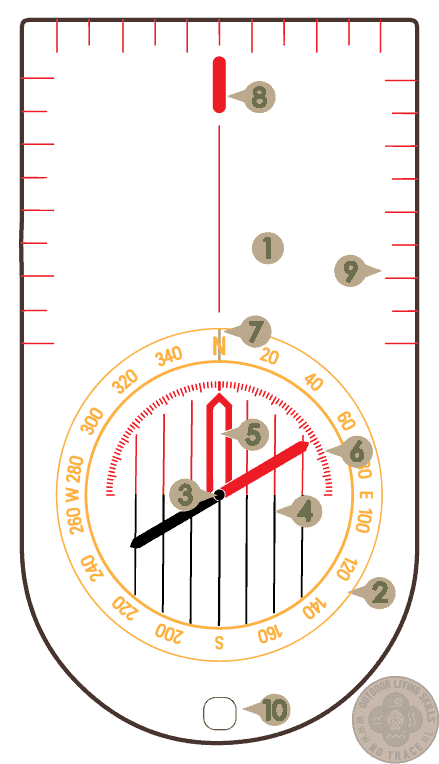 A compass works according to the principle that the needle of the compass always points north. This allows you to calculate which direction you walk in. To facilitate that arithmetic, almost all compasses have a ring that can be rotated, so you can read in which direction you are walking.

In order to use a compass, you need a good map. This must be at least the north-south axis, so that you can decide for yourself where the north is indicated on the map.

If you have found this on the map, you can proceed as follows to determine your course: 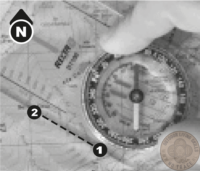 Determine direction to the target 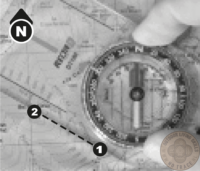 North to determine the goal 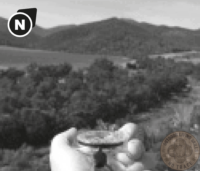 Determine course or direction of movement

Now take the compass in hand and keep it at eye-high. The compass must be held horizontally and the arrows on the plate must be pointed straight ahead. Now rotate with your body until the arrow of the ring points in the same direction as the needle of the compass. The (often) red end of the needle should now point in the same direction as the N or 0 degrees on the ring. The arrows on the plate now point in the direction you need to walk. Now, in the distant, find an object that the arrows point to and walk towards it. If you have arrived, repeat the previous steps and re-determine your direction.

The above sounds pretty simple and is in fact. It actually becomes difficult only when you actually want to (or should) measure very accurately. Then things like declination and misrepresentation are discussed. 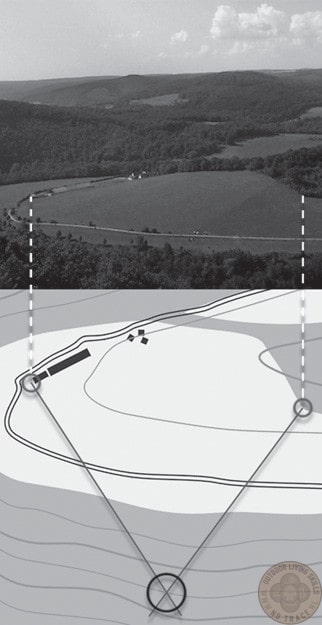 To calculate your own position, we can use two different methods:

Cross measurement is the easiest of the two, simply because it takes less work and time. This method is often also slightly less accurate than the triangulation. For a cross measurement, you look for two recognizable (and known on the map!) objects in the area that are so apart that the angle between them is between 45° and 135°. At an angle smaller or larger, the method becomes less accurate.

First, determine the direction angle to the first object. You do this by pointing the compass at the object and then turning the compass rose around in such a way until the north of the rose is exactly the same as the north that indicates your compass needle.

Then place the compass on the map and rotate the compass until the lines of the compass rose run parallel to the lines to the (magnetic) north of the map. Now you make sure that your compass house or compass plate is against the object you just probed so you can draw a straight line from that object to the direction you are.

Now you do the same with the other object: gauge and measure angle, transfer angle to the map, and then draw a line.

You’ll see that the two lines are cutting each other somewhere: this is where you’re about to be.

With a triangulation you do exactly the same as with the cross measurement, only you now use three objects and therefore three lines. Where the lines intersect, a very small triangle is often created, hence the name triangulation. You’re in the middle of that triangle.

As you know, the needle of the compass always points north. What you probably didn’t know is that this isn’t the real north. In reality, there are three different ‘north’:

This is the real north as it always appears on a globe, namely the tip of the globe. This place is a fixed place and has once been established using complex calculations. Now you could find the geographic north pole more easily by means of a GPS. On a map, the geographical north is usually indicated by a star (*).

This, too, is a changing north, whi