Marco’s love of being outside began at a very early age. Born on the second-to-last day of 1974 and grew up in the Lopikerwaard just before the game consoles entered many households.

Through his grandfather he started to discover nature and love it. His grandfather always wanted to be a forester, unfortunately the second world war put a stop to this, but this one never deprived him of the love for nature. His grandfather also had a bookcase full of books about everything that grows and blooms supplemented by a large encyclopedia, which Marco learned early on to seek and process knowledge.

A large part of his childhood consisted of building huts, cooking on a campfire and observing wildlife. Living on the outskirts of the village of Lopik, he had plenty of suitable space for this. Marco’s imagination and inventiveness, in addition to the soldier’s “handbook”, where he used his basic knowledge of how to camouflage their huts and cook in the field were the limits of the possibilities he experienced. His clothes consisted of green stuff that were bought at a local army dump. This also allowed Marco to observe hares, rabbits and (predatory) birds without their knowledge.

He also often came home with skeletons of animals that Marco had found. He used to clean these, put them in a chloride solutions and shelve them. He also tried to find out what animal it belonged to.

Holidays were often celebrated in Brabant where they stayed near the Peel, near the village of Vlierden. Next to the campsite was a farm. Marco was more often found there and on the neighbouring sand drift and forests than anywhere else. He has very fond memories of that.

For Marco, Bushcraft is a beautiful combination of nature experience and anthropology. Who does what in which environment and why? His area of interest is so great.

Am I a Bushcrafter? Is a question he’s ever asked himself. He doesn’t know, and Marco doesn’t really care. Especially when the word seems to want to cram him into a box. Marco knows that he always finds his peace “outside”.

The emphasis for Marco is mainly on being a guest. And that’s how he tries to behave. He only takes what is needed and leaves only the inevitable behind. (No Trace ;-)) For example, he has made a habit of not taking the first thing marco thinks, when looking for something. I’d rather continue searching and take the third or fourth. Nature always provides us in our needs, as long as we treat it with respect.

Marco enjoys natural products and working with them and manufacturing utensils from them. Especially in the consumer society in which he seems to live. Where everything seems to be symmetrical and immaculate, Marco can really enjoy following the natural lines. A spoon with a “curved” stem because he followed the grain when cutting. A spatula with a hole because there was a gnarlin the wood. And so on. But everything still serves the purpose for which it was created. However, he has learned to make everything as beautiful/good/durable as possible. To show respect for what he has “taken” in this way.

Marco is increasingly experiencing the value of natural materials and considering the waste of them. With some hunters and sheep farmers in his area, this has led to the choice to follow the LBN yearcourse. In addition, he cannot purchase the weather conditions, the encounters with flora and/or fauna etc. He can adapt to it or increase the chances of experiencing a positive experience by gaining knowledge. 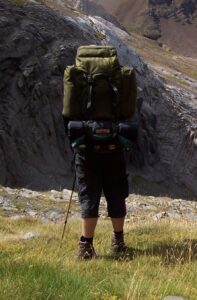 Marco in the Pyrenees

Holidays with walking tours through the Pyrenees, for example. A few times from France to Spain and back again. Marco took it all in, made him more and more aware of his luggage. “The more you know the less you carry” became true. Local knowledge of and about the area in which he is then located is essential. Marco was able to rediscover the real outdoors when he toured New Zealand for a few months in 2002. Marco has had a great opportunity to put a lot of his knowledge into practice and build on a lot of his acquired knowledge there, due to the wide variety of nature and “micro-climates”.

In the meantime, he has noticed that in addition to gaining new knowledge, he can also enjoy sharing all the knowledge gained. This is one of the reasons for him to start No Trace and also to start bushcraftpedia.org. Unfortunately, the latter always comes into the tribulation. So if you’re reading this and want to help set it up. Contact him!